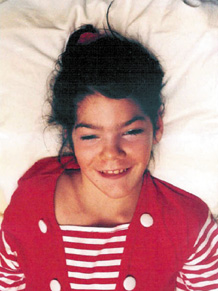 A friend recalls what it was like to know Emilia Draheim, who lived with PKAN

When I think of Emilia, my mind paints a picture of a happy young woman. Even though her world was physically small, she seemed to take such joy in every part of it, as though she were a world traveler going on a grand adventure. It is very humbling to me to be shown happiness by a person who suffered as much as Emilia did in her life.

When I think of Emilia, I see a beautiful young woman who transcended illness and physical confinement with happiness and sympathy for others. Our pain at losing her is so very deep and hard to bear. Yet, I am grateful for the opportunity to have known someone as brave and special as Emilia.