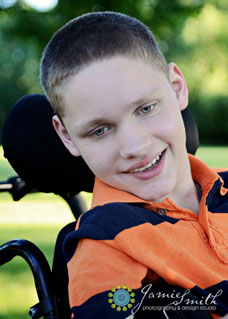 I remember him staring at me with those big blue eyes. I felt like God was giving me a tiny peep of heaven when I looked into his eyes. It was also at that moment I realized what a responsibility God had given me--a responsibility that I am beyond grateful for.

I have said it so many times before, I am the luckiest mom in the world, and I thank God every day that he chose me to be Zach's mom. Over the last couple of days, you have heard a lot about Zach’s million-dollar smile, which he definitely had, but I am also going to talk about something else.

Zach had the heart of a champion.

Phil Jackson, coach of the Chicago Bulls, used to describe a certain NBA player that way. Some of you may have heard of Michael Jordan and his refusal to lose. Zach didn’t get the chance to play basketball, but he faced a much more important battle, a battle to live. And it was a fight Zach also refused to lose. The first two years of Zach’s life pretty much progressed “normally.” But as the years went on, I watched this awful disease take away Zach’s ability to walk, then crawl. Ultimately, he could barely move. I watched Zach get poked, prodded and subjected to numerous painful procedures and tests, over and over again. Despite this, Zach kept on smiling and kept fighting, unleashing the heart of a champion.

There were many close calls. Numerous times we were told that Zach’s body was shutting down but each time he refused to give up and rallied back. Just this past fall, the hospice team swore that Zach was shutting down. Six months later, Zach was still fighting. I don’t blame the hospice crew. The only thing they were guilty of is underestimating the heart of a champion.

Zach did not travel this tough road alone. Just like Michael Jordan had Scottie Pippen, Dennis Rodman and others, Zach had a team of warriors fighting with him. There is an amazing research community trying like mad to get a cure for these diseases. We are so grateful for them and the fact that an amazing organization like the NBIA Disorders Association connected us with people who understand. Some of my closest friends are also in this “NBIA” world. Zach had the best caregivers in the world, and a whole community that fought along with him. He was a loved little boy with a smile that no one will ever forget.

There is no easy way for me to say goodbye. We can’t dwell on the sadness or keep asking “why?” We will never find a reason why such a cheerful and beautiful child was taken from our lives at the age of 12. Instead, we should focus on how happy he made us when he was in our lives.

We will miss Zach forever and will always remember that famous smile of his. He is at peace now and in the arms of Jesus watching over all of us and smiling.

Zach was a fighter to the very end. Champions go down fighting. Never underestimate the heart of a champion. If you want to honor Zach’s memory, share a “Random Act of Kindness.” We passed out cards that asked others to spread Zach’s smile (a Zach Attack!) and hope to spread them all over the world. We want to turn the hurt into good, do something for someone else. It’s what that smile of Zach’s told us to do every day!