Neuroferritinopathy is a genetically dominant form of NBIA. That means it can be inherited if only one parent has the mutated gene. Although the prevalence is unknown, only about 100 cases have been reported, and most share the same gene change, suggesting a common ancestor. It is caused by mutations in the FTL gene, which stands for ferritin light. This is one of two sub-proteins that make up ferritin, a protein in the body that helps store and detoxify iron. MRIs are different from those of other NBIA patients.

The effects of neuroferritinopathy typically begin around age 40, although onset in the early teenage years and in the sixth decade have been recorded. A family history consistent with autosomal dominant transmission are indicative of this disorder.

Individuals with neuroferritinopathy typically present with either dystonia or chorea. Dystonia is a movement disorder in which involuntary sustained or intermittent muscle contractions cause twisting and repetitive movements, abnormal postures, or both. Chorea is an ongoing random-appearing sequence of one or more discrete involuntary movements or movement fragments. This usually affects one or two limbs. Mild changes in thinking (cognitive effects) can also occur at this time.

Within 20 years of onset, neuroferritinopathy usually begins to affect movement in all the limbs. It also causes difficulty speaking and resembles Huntington’s disease. Cognitive deficits and behavioral issues worsen over time.

Serum ferritin concentration may be low. Eye movements are usually not affected throughout the disease course. Axonal swellings (neuroaxonal spheroids) may be present. 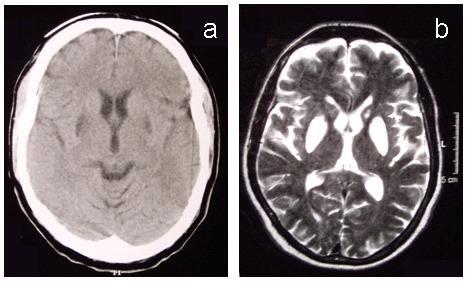 a. Non-contrast brain CT symmetric low signal in the putamina

b. T2-weighted MRI image showing cystic change involving the putamina and globus pallidi and with increased signal in the heads of the caudate nuclei [Crompton et al 2005] 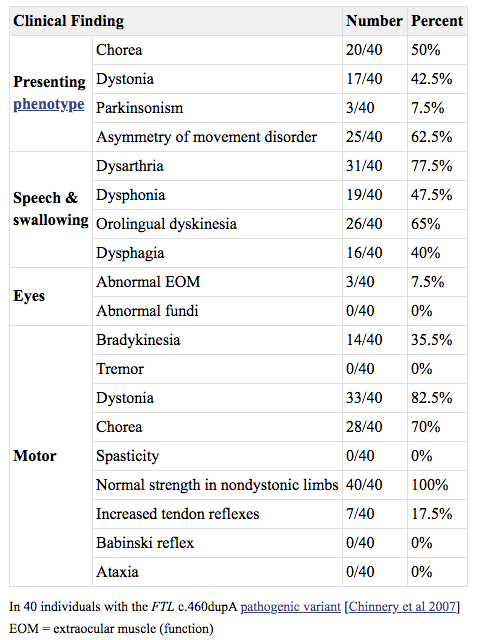 Psychometric, physiotherapy, speech therapy and dietary assessments should be made.

Dietary assessment is helpful. Affected individuals should be evaluated to ensure that they maintain caloric intake. Physiotherapy can help maintain mobility and prevent tightening of muscles, ligaments or skin.

A main resource for this clinical information is Neuroferritinopathy - GeneReviews® - NCBI Bookshelf. GeneReviews is primarily used by genetics professionals so the terminology and information may be difficult for the general public to understand.

The TIRCON International NBIA Registry is housed at Ludwig Maximilian University of Munich, Germany, and was created under an EU grant from 2011-2015 called Treat Iron-Related Childhood-Onset Neurodegeneration.

The NBIA Alliance and other sources have provided funding since 2015. Clinical centers from 16 countries have provided patient clinical data. There are over 750 entries consisting of NBIA patients and controls as of September 2015. Clinical centers seeing at least five NBIA patients are eligible to participate. Clinical and natural history data are available to researchers studying NBIA disorders. Contact Anna Baur-Ulatowska at Anna.Baur@med.uni.muenchen.de for more information on this registry.

Search ClinicalTrials.gov in the US and EU Clinical Trials Register in Europe for information on clinical studies.

Other research articles and studies can be found at Pub Med Central.

Following is a list of recent Neuroferritinopathy research articles:

2021 - Pathogenic mechanism and modeling of neuroferritinopathy

Join Samantha Denison and Darren Robson as they share their experiences of living with neuroferritinopathy. 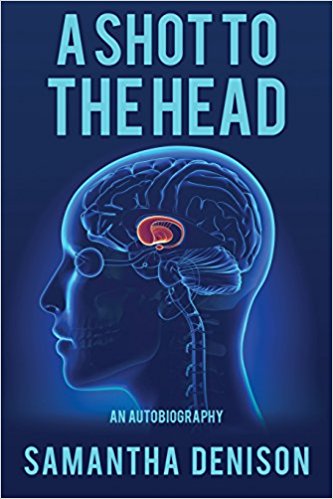 A Shot To The Head takes you on the journey of one woman, Samantha Denison, for whom Neuroferritinopathy is an everyday reality.