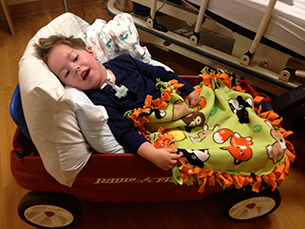 This is the story of Logan and his family... learning and living with a diagnosis of an NBIA disorder. 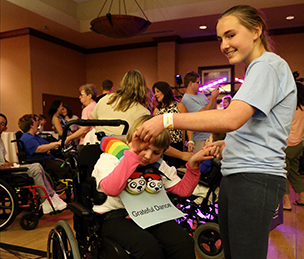 Watch one family's story of a diagnosis of NBIA - INAD to becoming involved in the NBIA community.

The story of a newly diagnosed NBIA family

The story of a newly diagnosed NBIA family

Jonathan Stretter’s Story of Move from California to Massachusetts

- Article by Jonathan Stretter and family 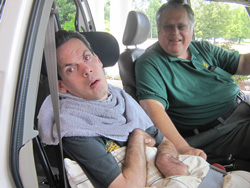 Mid-July 2013 - Things are changing around here. There are a lot of empty boxes on our front porch. My mom and dad are talking about moving to be closer to my brother. My mom wishes those boxes would magically fill up.

Boxes are beginning to pile up now inside our house. They don’t bother me much since I still have my comfy recliner to sit in and my TV to watch after I get home from my day program at Milestones.

- Article by Britney Glaser for KPLC-TV

"When a young girl named Ainsley was given a terminal diagnosis, her big sister Briley, only six at the time, knew everything was about to change. Ainsley is now wheelchair bound, but her sister is giving her the legs and voice she could never use."

As a toddler, Ainsley Rossiter appeared to be healthy and happy. However, her parents' intuition about something being off kicked when her development slowed. "At about 15 months she was not walking yet and she wasn't talking much," said Ainsley's father, Major Kim "Rooster" Rossiter.

Looking back, there were signs that my brother, Brian, and I were heading to a medical crisis. But no one thought of NBIA (Neurodegeneration with Brain Iron Accumulation) when we were kids. We wouldn’t know those words until much later.

I remember when we were growing up that Brian fell a lot. He also stuttered and went to speech therapy. As soon as he would stop the speech therapy, the stutter would come back.

He had a purpose and you have hope

Sept. 14 marked the fifth anniversary of our son's passing. Had he lived, Kenny would have been 26 on Oct. 31.

Patty Wood, president of NBIA Disorders Association, recently asked me if it seemed like only yesterday that Ken was here with us.  I told her, yes, at times, but it also feels like forever since we held him, or heard his mischievous laugh or saw that gorgeous smile.

I remember finding Patty through the National Organization for Rare Disorders in the early 1990’s. There were only about 10 affected families then, but it meant everything to find another soul who understood what we were going through and was doing something about it.

Many NBIA families, like mine, are eagerly awaiting a trial of the iron chelation drug, deferiprone. We hope to learn from a European trial called TIRCON, Treat Iron-Related Childhood-Onset Neurodegeneration, whether the drug can slow symptoms and perhaps even reverse the effects of iron overload in the brain.

Toronto-based ApoPharma, the maker of deferiprone, wanted to hear from affected NBIA families about their hopes for the drug. I was pleased to be able to share that perspective at a recent meeting with company officials and scientists in June.

At long last, my family has a big piece of the puzzle

I was surprised one day about eight months ago when NBIA geneticist Allison Gregory called me to say that researchers had found the genetic defect that causes NBIA in my family.

The gene is MMIN. It causes mitochondrial-membrane protein-associated neurodegeneration, or MPAN.

After all these years, we had an answer.

Long ago, my three NBIA-affected children, their father, an unaffected child and I donated blood to researchers to find this answer. It has been a long journey.

When Cameron Meade was in the hospital struggling with dystonic movements in 2009, his doctor at Sparrow Hospital in Lansing, Mich., Stephen Guertin, sought the help of Drs. Penny Hogarth and Susan Hayflick for ways to ease his distress. Both are experts in NBIA.

Cameron was not like any other patient they had cared for at Sparrow. His dystonia, which caused severe pain and affected his breathing, seemed to be helped only briefly by medications. During their weekly calls, Guertin, Hogarth and Hayflick devised – and then revised – a medication regimen for Cameron in an attempt to give him some relief.