PKAN or Pantothenate Kinase-Associated Neurodegeneration, is the most common form of NBIA. Between 35 and 50 percent of the NBIA population has PKAN.

It is caused by mutations in the PANK2 gene. This gene provides the instruction for making an enzyme called pantothenate kinase. Researchers are investigating how this missing enzyme damages nerve cells in the brain and causes iron to build up.

There are two forms of PKAN: classic and atypical, although some people have symptoms that place them in between the two categories.

Click on any of the thumbnail images below to view the photos in a larger size; move cursor to upper right of picture to click on next and view as slideshow:

Individuals with classic disease have a more rapid progression of symptoms. Classic PKAN develops in the first 10 years of life, starting around age 3 1/2, on average.

These children may initially be perceived as clumsy and later develop more noticeable problems with walking. Eventually, falling becomes more common. Because they have trouble protecting themselves during falls, affected children may have repeated injury to the face and chin.

Many individuals with the classic form of PKAN require a wheelchair by their mid-teens. Most lose the ability to move or walk independently between 10 and 15 years after the beginning of symptoms, and also by this time may have enough trouble with chewing and swallowing that a feeding tube becomes necessary.

Dystonia, a movement disorder that causes the muscles to contract and spasm involuntarily, is always present and usually an early manifestation. Head and limb dystonia are frequent and may lead to recurrent trauma to the tongue, in some extreme cases requiring full-mouth dental extraction, or bone fractures from the combination of extreme bone stress and osteopenia.

Patients are at risk of premature death. The dystonia can result in swallowing difficulty and poor nutrition. Such secondary effects are more likely to cause premature death than the primary neurodegenerative process.

However, life span varies among patients. With improvements in medical care, a greater number of affected individuals are living into adulthood.

The atypical form of PKAN usually occurs after age 10 and within the first three decades of life. The average age for developing symptoms is 13. The disease progresses more slowly than classic PKAN and generally is less severe.

The symptoms vary from case to case and are more different than those of early-onset disease. The inability to walk typically occurs 15 to 40 years after symptoms develop. Speech is affected early on. Common speech problems are repeating words or phrases (palilalia), rapid speech (tachylalia) and slurring words (dysarthria).

Movement problems are common, although they develop later. Patients often are described as having been clumsy in childhood and adolescence. Similar to Parkinson’s disease, “freezing” while walking may occur, especially when turning a corner or encountering surface variations. Shaking or tremors also have been reported.

Degeneration of the retina may also occur, though much less often than classic PKAN.

PKAN is inherited and is called an autosomal recessive disorder. Because most of our genes exist in pairs (one coming from the mother and one coming from the father), we normally carry two working copies of each gene. When one copy of a recessive gene has a change (mutation) in it, the person should still have normal health. That person is called a carrier.

Recessive diseases only occur when both parents are carriers for the same condition and pass their changed genes on to their child.

There is a one in four chance that two carriers would have an affected child. The chances are two in four that the couple will have a child who also is a carrier; and they are one in four the child won’t have the gene mutation.

Carrier testing for at-risk relatives and prenatal testing can be obtained if both disease-causing mutations have been identified in an affected family member.

Preimplantation genetic diagnosis may be an option when the disease-causing mutations have been identified.

PKAN is suspected when magnetic resonance imaging (MRI) changes are seen in an individual with symptoms typically seen in this disease.

All individuals with PKAN have high levels of brain iron, mainly in the globus pallidus. PKAN has a unique characteristic seen on an MRI. Iron accumulation generally makes the brain look dark on certain (T2-weighted) MRI views. In PKAN, this dark area has a very bright spot in the center, called the ‘eye of the tiger sign. It is rarely seen in other forms of NBIA.

The sign sometimes is absent in the early stages of disease. In the Dominican Republic, where 21 affected individuals have been diagnosed with PKAN and have the same PANK2 mutation, it has been reported that six individuals lacked the ‘eye of the tiger sign’ despite their similarities to others in this group.

Some cases with a purported ‘eye of the tiger’ sign will be found to have Mitochondrial-membrane Protein-Associated Neurodegeneration or MPAN, a different form of NBIA that can look similar to PKAN when comparing scans.

Another hallmark feature is the presence of a movement disorder, including one or more of the following: dystonia, rigidity or choreoanthetosis (twisting and writhing). Other common features include corticospinal tract involvement which is responsible for conducting impulses from the brain to the spinal cord, extensor toe signs that indicate damage to the central nervous system and spasticity, along with retinal degeneration or optic atrophy. Seizures are rare.

To establish the extent of disease in an individual diagnosed with PKAN, the following evaluations are recommended:

This is the most debilitating and distressing symptom of the disease. Therapies that are used with varying success include botox injected into the muscles; oral baclofen and trihexyphenidyl; intrathecal baclofen; deep brain stimulation; and physical and occupational therapy as indicated, particularly for those who are only mildly symptomatic. Therapies to maintain normal joint mobility for as long as possible may be useful.

Please see our Medical Information section for more in-depth information on these therapies.

Approximately two out of three individuals with PKAN develop retinal degeneration with it more common in classic PKAN. Loss of peripheral vision may contribute to falling and gait problems in the early stages of PKAN. The retinal degeneration follows a typical clinical course, with nyctalopia (night blindness) followed by progressive loss of peripheral visual fields and sometimes eventual blindness. Evaluation by electroretinogram often detects retinal changes that are asymptomatic. Individuals with a normal eye examination at the time of diagnosis generally do not develop retinopathy later. Optic atrophy is only found in 3 percent of patients and has not been observed in atypical PKAN.

PKAN is a progressive disorder. Affected individuals experience episodes of rapid deterioration, often lasting one to two months, interspersed with longer periods of stability. Reasons for this are not clearly understood.

As the disease progresses, episodes of extreme distress may last for days or weeks. It is especially important during these episodes to evaluate for causes of pain so it can be treated. These may include occult GI bleeding, urinary tract infections and bone fractures. Individuals with PKAN are at an especially high risk for fractures without apparent trauma because of osteopenia and stress on long bones from dystonia.

Swallowing evaluation and regular dietary assessments are needed to assure adequate nutrition. Once the individual can no longer maintain an adequate diet orally, a gastrostomy tube becomes necessary.

The following should be performed on a regular basis: monitoring of height and weight using appropriate growth curves to screen children for worsening nutritional status; eye assessment; oral assessment for consequences of trauma; assessment of walking and speech abilities.

Iron Chelation: Interest in this therapy has re-emerged as data on deferiprone (Ferriprox®) have been collected on affected individuals. Iron chelating agents have been tried in the past without clear benefit. Until recently, trials were limited by the development of iron deficiency in the rest of the body before any clinical neurologic benefits were evident. Unlike earlier drugs, deferiprone crosses the blood-brain barrier and removes iron from the brain cells.

One small phase II pilot trial has been performed to assess deferiprone in the PKAN population. Deferiprone was tolerated well in the nine affected individuals who completed the study, and there was a statistically significant reduction of iron in the pallida by MRI evaluation. However, there was no change in their clinical status. The authors suggested that a longer trial period may be necessary to produce clinical benefit.

An international clinical trial with longer duration has now been completed and results are due to be published soon. Please see our Research section for more information on the Phase III clinical trial of deferiprone.

Clinical studies are underway to investigate the potential of a form of pantothenate, which is pantethine and pantethine derivatives, to treat PKAN. Studies with fruitflys show that when pantethine is provided in their food, they live longer and have a lower rate of nervous system decline.

In a grant provided by the NBIA Disorders Association, Dr. Ody Sibon from the University Medical Center Groningen, in Groningen, Netherlands, studied pantethine derivatives to see if they are more stable in the human digestive system and blood. Also, as part of the 2011- 2015 European Union grant called Treat Iron-Related Childhood-Onset Neurodegeneration, or TIRCON, pantethine derivatives were identified as a possible treatment for PKAN. Please see our Research section for more information on TIRCON and the box to the right for current clinical trials for PKAN.

Brain Imaging: Researchers at the Oregon Health & Science University are doing a brain imaging study to explore brain blood flow, called perfusion, in PKAN. They hope to gain new insights into how the disease progresses.

Please see the link in the right hand column on this page for more detailed clinical information on PKAN at Gene Reviews, which was used as a source for some of the above information. Gene Reviews is primarily for the use of genetics professionals so the terminology and information may be difficult to understand for the general public. 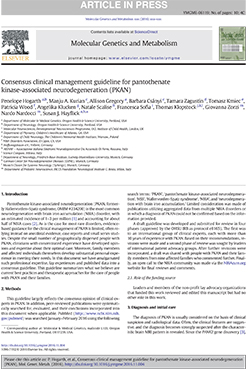 This article is also available on the Molecular Genetics and Metabolism website.