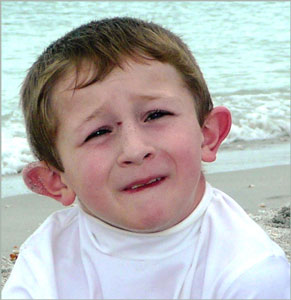 When Cameron Meade was in the hospital struggling with dystonic movements in 2009, his doctor at Sparrow Hospital in Lansing, Mich., Stephen Guertin, sought the help of Drs. Penny Hogarth and Susan Hayflick for ways to ease his distress. Both are experts in NBIA.

Cameron was not like any other patient they had cared for at Sparrow. His dystonia, which caused severe pain and affected his breathing, seemed to be helped only briefly by medications. During their weekly calls, Guertin, Hogarth and Hayflick devised – and then revised – a medication regimen for Cameron in an attempt to give him some relief.

When Cameron left Sparrow Hospital to go to DeVos Hospital in Grand Rapids to have a baclofen pump inserted, Guertin promised he would invite Hogarth to Michigan to share her knowledge about NBIA.

That promise turned into a two-day “visiting professor” visit for Hogarth this past spring. Sadly, this took place after Cameron’s death in January 2010. During her visit, Hogarth spoke at Michigan State University on Huntington disease, another inherited neurological illness, and on PKAN at Sparrow. About 40 or 50 doctors, researchers and health professionals attended each talk.

Hogarth spoke eloquently about PKAN, the form of NBIA Cameron had. She discussed the history, diagnosis and the status of research efforts. She gave real-life examples of those living with the disease, and ended with a photo of Cameron and expressions of gratitude to his family for sharing in the continued hope of research to find a cure.

“I decided not to spend much time during the formal presentation discussing management, because, as I told them during the talk, most of the people in the audience would never see another PKAN patient, and if they did, the management recommendations would quite likely have changed,” she said.

She did, however, meet privately with physicians and residents (doctors-in-training) and discussed NBIA management issues in that setting. And she also talked informally with researchers and faculty at both institutions.

“It was especially meaningful to present at Sparrow to an audience that included many who had come to see the best and worst faces of NBIA during Cameron’s struggle with the disease in their hospital,” Hogarth said. “Many folks expressed their grief for the loss of Cameron, and their admiration for his strength and that of his parents, Sally and Lynda, and their extended circle of family and friends.”

Hogarth said she is willing to put on presentations at other hospitals and universities to “spread the word” about NBIA. Recently, she and Hayflick spoke at a conference in Germany about NBIA, and Hogarth participated in a two-day meeting about the use of deferiprone in NBIA and other disorders earlier this year.

In October she and Dr. Hayflick will be traveling to the Dominican Republic to meet with doctors treating NBIA patients in that country and hope to help advance the knowledge in the medical community there about these disorders.

Cameron Meade’s legacy burns bright, his parents said. “Cameron continues to teach us the importance of bringing people together to learn.”