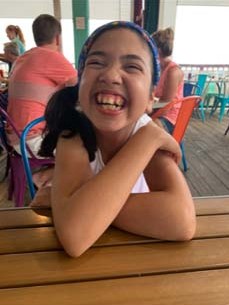 "Sophia, who is now 13 years old, had grown tired and frustrated having to endure the 82-mile round trip into the Texas Medical Center for frequent blood draws, visits and testing. She had not been diagnosed at the time and we were desperately searching for answers that could explain the source of her severe cognitive delays, worsening physical symptoms and increased seizure activity. She was having up to 15 absence and focal seizures a day, which no one had yet identified as epilepsy. Trying to be a strong mother and wife, I would hide away in my bathroom and weep as silently as I could. Sometimes I’d wail out in my car when I was alone wondering if God had forgotten us. I never wanted Sophia to see me in pain as I felt she was already shouldering so much.
Sophia worked as hard as she could at school and tolerated physical, speech and occupational therapy sessions, which did not always go smoothly. There were certainly a lot of crying and those tears didn't always come from her eyes alone. It's heartbreaking and unnatural to watch your only child struggle through skills that most toddlers adopt and attain so easily. I always felt the guilt of having to put her through so much and wondered if she questioned why any of this was necessary.

After having exhausted every possible test imaginable, including repeated metabolic panel testing as well as Whole Exome Sequencing (WES) in 2012, we had just about given up hope that we would ever learn what was robbing our Sophia of basic life skills and speech.

In 2014, I resigned my position at work to dedicate myself to Sophia's care and rigorous therapy schedule. After having taken a break from testing and having recovered from the disappointment of an inconclusive WES test, I decided to, “jump back on the horse” and resume my search to discover what was afflicting our Sophia. Our diagnostic odyssey was about reach a destination with answers for the first time. I started over completely having carefully selected an entire new medical team who was as invested in finding a diagnosis as I was. It was now January 2017 and having repeated the WES testing it was revealed that Sophia had an ultra-rare neurodegenerative disease called, NBIA BPAN5. I recall asking about treatment options for this disease and feeling the blow when the response was that unfortunately, “no cure or treatment options are available at this time other than continuing with our multi-discipline therapy efforts”.

Unsatisfied with this answer, we were soon on our way to learn more about this disease at the NBIA Family Conference in Chicago, where we met other families for the first time who were living in our shoes. We made so many wonderful and profound connections that it felt more like a family reunion than a conference. I saw other little girls who displayed similar movement patterns, and behavior. Like Sophia, so many had such happy and joyful demeanors and were extremely social.

We finally had the opportunity to consult with a BPAN expert and while in the middle of our interview Sophia started having seizure activity. Dr. Susan Hayflick stated right then and there that this was a type of seizure and that we should schedule an appointment with an epilepsy specialist as soon as we get back home. We had always suspected this, but since none of our EEGs ever showed seizure activity, it was difficult to diagnose. When we returned to Houston, we immediately scheduled an appointment and started medication. It’s been almost three years and Sophia has since then gone from reduced seizure activity to almost non-existent seizure activity, which makes her more available for learning, playing and just being herself.

Sophia is a beautiful, sweet and happy girl with an infectious smile and laughter that is soothing to the soul. She is very social and loves to give hugs and kisses to her favorite people. She reserves, “high-fives” for new friends. She has enjoyed therapeutic horseback riding since the age of 6. She loves to ride her adaptive trike and go kayaking out on the lake with mom and dad. She loves music, dancing and story time. Two years ago, we decided to join Girl Scouts even though I was terrified that we would not be able to do most of the activities and maybe not fit in. I am now glad that we did not allow my fear to get in the way of adventure. Despite this merciless diagnosis, Sophia is living life to her fullest and we have received the warm embrace and support of our NBIA community. We are treasuring each special moment and celebrating all of her accomplishments (even if they seem insignificant to most). Sophia has taught us what matters most in life, a lesson we may have missed if circumstances were not so. True Love! Love requires so much from us… patience, persistence, compassion, acceptance, resilience, long suffering and fight! Love never fails. Sophia, we love you so much and are so blessed and proud to be your parents."