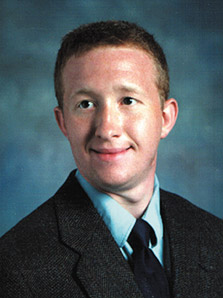 Bruce had "something special" besides his red hair and smiling brown eyes. He enjoyed life - bowling, watching football and driving his car. He graduated from Columbia High School in 1998 and attended Hudson Valley Community College.

He enjoyed going to work every day and earning money. The last five years of his life, he was a mail clerk in the State Education Building in Albany, next to the Capitol. He was happy and always positive and made lots of friends.

I was touched by the cards I received after his passing. One in particular sums up that "special something" Bruce had. It said:

"I work at the New York State Education Dept. I did not work with Bruce, so I did not know him well. But I would sometimes see him walking down the hall where my office is. I started saying hello and having conversations. I was so taken with him the first time I noticed him because he walked down the hall with such determination and strength and purpose and often with a smile, even though his body was not cooperating. I thought this is a special person worth knowing. And so we began our conversations. And he was a special person, I discovered.

I did not know what Bruce's disability was until I read the sad, terribly upsetting news in the newspaper. Still, I had never heard of NBIA until then. I have now read up on it and can only begin to imagine the challenges Bruce had to overcome, every day, and what it must have been like for you.

I want you to know that Bruce inspired me every time I saw him. And knowing what I now know, I realize he was an example of courage to me, in the (not so simple) acts of just getting to work in the morning and walking down the hall. I will miss him very much, but I will always remember him. I hope you can find some comfort in knowing that he mattered to people like me who you may not even know."

This touches me so much. Bruce was special and left a mark on each person he met. He never complained about his disability and lived his life to the fullest. We continue to miss you Bruce, every day!