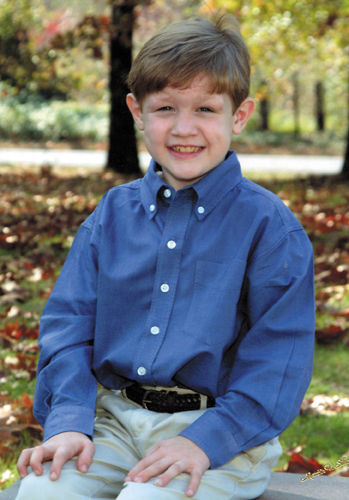 Take it from his “Bubby,” Ben Patterson had a way of putting things into proper perspective.

You were a lover, not a fighter. You smiled through all of the things that happened to you, which is more pain than I will probably ever go through.

With all his body had to endure, it would have been understandable if Ben had withdrawn. But he had too much to offer. To Will, his older “Bubby.” To his parents, Bill and Kim. To his grandfather, Ray. To his special-needs teammates on the Conway Braves baseball team. To those he warmed with a smile at church or school.

Without you my life would be so much different. You taught me not to give up, to keep fighting and to keep smiling.

It was tough to watch as NBIA erased the mobility Ben had so enjoyed. No more running full-tilt, bouncing off walls and bearing the scars that marked him as all-boy. Yet being at the mercy of others to serve as his hands and feet didn’t keep him from romping with Will.

You had my back no matter what, and I always had yours. You did much more for me in 12 years than most people will do for me in a lifetime. I am blessed to have had you for so long.

Blessings flowed in all corners of Ben’s world, including for friends made at school in Conway, Ark. Especially Robbie Powell, his best pal from first grade on.

You were always there for my brother and deeply loved him. You would come over to the house and sit all day even if he was asleep, and those were the times I could tell you truly cared.

Friends also saw Ben’s precocious side – including his flirtations with girls who would skirmish over who got to wheel him to recess. (The kisses that ensued would occasionally get him in trouble with his teachers.) His charm carried over into his home life, as well, where his granddad Ray – Ben called him Papa – was putty in his hands.

You impacted his life more than anyone, and he impacted yours, I know. When we were in a room and you walked in he would completely ignore whatever was happening and concentrate on you, his favorite person.

Now he will focus his charms on dear “Gram,” who preceded him and Papa in death. And on his Heavenly Father, who made a special place for him free of pain.

And those left behind have gotten so much as well – and not just fond memories: There’s also hope. There’s persistence. There’s faith and love. And an example of how to live - each day.

I truly owe my life to you and will try and live it the way you would. You will always stay with me, leading me, and I thank you so much for that. I know in my heart that you’re just as much here now as you ever were.