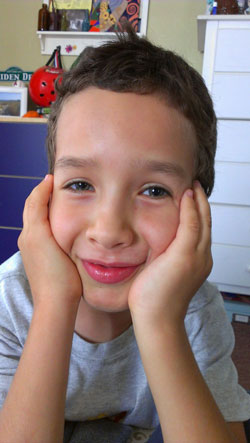 Aiden Arzate was born to Lydia Arzate on January 28, 2003. He was the oldest of two boys.

Aiden grew up with his mom, his aunt Xochitl and his (best buddy) grandpa Leo. Because he was the first and only child for 10 years, Aiden had all the attention of his mom and aunt and all their friends. This was thrilling for Aiden since he loved people and thrived on making friends wherever he went.

Once Aiden was school age, he attended the very same elementary school that his mom had attended when she was a little girl. There, he made many friends among his classmates and teachers. Going to school and being among his friends, teachers and his aids was like being with family for Aiden.

After school and after mom would arrive home, Aiden would greet her affectionately with kisses on the cheeks and a poetic phrase of his own; “Mommy, mommy! I love you, I miss you, I kiss you!”
Aiden's abilities began to be limited early on. Lydia diligently adapted to her sons ever changing needs. She helped feed him, clothe him, bathe him, etc. Aiden always appreciated and thanked his mom for all she did. On one occasion, while Lydia was giving Aiden a bath, he was so relaxed, he looked at his mom and said, "Ahh, this is the life!" 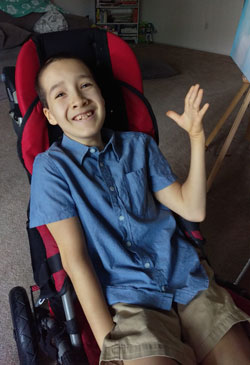 As Aiden's disorder progressed, he gradually lost his ability to walk and talk, but he still enjoyed the little things. For example, listening to his favorite music, being pushed really, really fast in his stroller on outings. His mom would wheel him to his favorite spot in the house where he could get a view of all the activity outside the window and watch his mom making food in the kitchen simultaneously. He was so proud of his baby brother Kai. He enjoyed watching him play and enjoyed holding him proudly on his lap when wheeled through the halls of CHLA and CHOC.

Aiden's true love stared early in his life when his mom and aunt began studying the Bible and learning about the true God Jehovah. This made a lasting impression on Aiden’s heart and he loved learning about spiritual truths from the Bible. His favorite subject was about Jehovah and his immense creative power. Learning that Jehovah is “the Maker of Heaven and earth,” (Ps. 146:6; Ps. 83:18) Aiden began developing a love and fascination with the beauty, the rich variety of plant and animal life on our planet and the awe inspiring discoveries of the universe. He enjoyed learning how Jehovah’s creative power is evident in every facet of the earth’s design. By means of his Learn from the Great Teacher book, Aiden would happily share what he learned with his grandpa so that he could learn about Jehovah too. “Grandpa, do you see this picture?" Aiden would say, holding up his illustrated book, "This is the beautiful paradise earth that Jehovah made. Because Jehovah is a awesome creature. A powerful creature. He made everything. He’s a spirit creature!...”