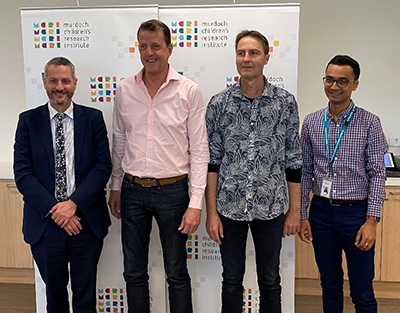 Thanks to money raised in last year’s Million Dollar Bike Ride, the NBIA Disorders Association is supporting a stem cell research project in Australia that will examine BPAN’s effects on the brain and drugs that could help treat the disorder.

Dr. Paul Lockhart of Murdoch Children’s Research Institute (MCRI) in Melbourne is leading the project and received a grant in February for $60,561 from the bike ride’s sponsoring organization, the University of Pennsylvania. Of that total, the NBIA community raised $30,561 and won the maximum match of $30,000 from the school’s Orphan Disease Center to study Beta-propeller Protein-Associated Neurodegeneration (BPAN).

Our organization was deeply involved in the grant-making process. We wrote the request for proposals, and members of our Scientific & Medical Advisory Board reviewed the applications and made recommendations. The University of Pennsylvania will manage the grant and send us a copy of the final scientific report that Lockhart’s team submits.

The project is titled “Development of novel human stem cell models of BPAN for disease modeling and drug screening,” and is being conducted by the Bruce Lefroy Centre, a genetics research unit at MCRI, where Lockhart is co-director. His co-investigators are Dr. Martin Delatycki and Dr. Jay Shukla.

The team has identified 11 individuals in Australia who have BPAN, ranging in age from toddlers to a 36-year-old. Most of them have agreed to donate their skin cells for the study. MCRI researchers will reprogram those cells using cutting-edge stem cell technologies to generate the kind of nerve cells affected by BPAN. This ‘brain in a dish’ model allows direct testing of how BPAN affects brain function and offers a way to rapidly screen large numbers of drugs for potential treatments.

The team will create neural networks that mimics the way nerve cells communicate with each other in the human brain. They hope these models will help them identify what causes specific neurons in the brain of BPAN-affected individuals to degenerate much earlier than in individuals without the disorder. In addition, the team will use the models to test drug compounds that might be effective in treating BPAN. Such studies are required before a potential treatment can move to a clinical trial in patients.

This research is part of a larger project launched in December 2019 with an anonymous $200,000 donation in honor of five-year old Angus Hunter, who has BPAN. The Hunter family lives in Melbourne and is active in raising awareness and funds for BPAN research, as well as providing support to BPAN families.